Meet the public policy experts behind our online courses 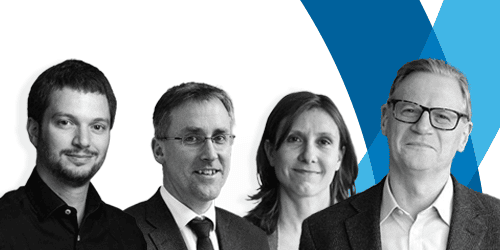 Our short and online government and public policy courses offer you the chance to hone your skills in areas such as economics and cyber security in a public sector or policymaking context.

But what about the government and public policy experts behind these ground-breaking courses? What do they bring to the table to ensure professionals like you receive the high-quality teaching and training needed to shape a more positive future?

Let’s meet some of the inspiring academics you could be learning from on our range of short online courses at the Blavatnik School of Government.

Ciaran Martin is Professor of Practice in the Management of Public Organisations at the Blavatnik School of Government and is one of the public policy experts teaching on the Cyber Security for Public Leadership: Planning, Policy and Strategy online short course.

Ciaran has had a 23-year career in the UK civil service. Before joining the School, he was the founding Chief Executive of the National Cyber Security Centre (NCSC), part of the Government Communications Headquarters (GCHQ).

Prior to this, Ciaran held senior positions within the Cabinet Office, including Constitutional Director (2011–2014) and Director of Security and Intelligence (2008–2011).

Ciaran led a fundamental shift in the UK’s approach to cyber security, successfully advocating for a more interventionist posture. Adopted by the Government in the 2015 National Security Strategy, this approach led to the creation of the NCSC in 2016 under Ciaran’s leadership.

In 2020 Ciaran was appointed Companion of the Order of the Bath (CB) in the New Year’s Honour’s list.

‘I remain an optimist about technology’

Watch Ciaran speak at the 9th Annual International Cybersecurity Conference at Cyber Week in 2019, during Ciaran’s time as CEO of the NCSC, below.

In this talk, Ciaran argues for a ‘relentless focus on the basics’ and the need to ‘restore confidence in our internet’.

Connect and keep up-to-date with Ciaran’s work by following him on Twitter.

You can learn from Ciaran’s extensive knowledge and experience and apply it to your own role. Find out more about the Cyber Security for Public Leadership: Planning, Policy and Strategy online short course.

Martin Williams is Associate Professor in Public Management at the Blavatnik School of Government and teaches on the Evidence in Public Policy online short course.

Martin’s teaching and research focuses on the roles that evidence, context and external validity play in policymaking. In particular, he researches policy implementation, public service delivery and bureaucratic reform, mainly focusing on low and middle-income countries.

Before joining Oxford University, Martin was a Postdoctoral Research Fellow at the Department of Economics, University College London. Prior to that, he had completed his PhD in the Government Department at the London School of Economics and Political Science.

‘Why do some projects get finished and others don’t?’

This mini-documentary explores Martin’s collaboration with Ghana’s civil service. Martin worked with the Ghanaian government on policy solutions to tackle misspending on local government infrastructure projects – 1 in 3 of which, they found, are left incomplete and cost around 20% of all spending in this area. Watch below for ‘research into policy’ in action.

If you evaluate the impact of policies as part of your day-to-day activity, you now have the chance to apply Martin’s experience and knowledge to your own work. Learn more about the Evidence in Public Policy online short course.

He is currently developing a new research programme on revitalising democracy and civil society in accordance with the aims of the Alfred Landecker Professorship.

Jonathan’s other current work largely concerns equality, disadvantage, social justice and poverty, as well as applied topics such as public safety, disability, gambling and the regulation of recreational drugs.

‘How safe is safe enough?’

In April 2021, Jonathan presented a masterclass webinar on COVID-19 vaccines and safety, evaluating the policymaking decisions that were made in the fight against the virus and the risks that had to be considered. Watch below.

Do you need to interact with, understand and interpret policy as part of your job? Take the opportunity to learn from Jonathan. Discover more about the Values and Public Policy: Political Philosophy in Practice online short course.

Clare Leaver is an Associate Professor of Economics and Public Policy at the Blavatnik School of Government and teaches on the Economics for Public Policy online short course. She is also a Fellow of University College, Oxford.

Clare studies careers and incentives in the public sector, with a focus on education in low and middle-income countries. She is a Research Coordinator for the Research on Improving Systems of Education (RISE) Programme, Co-Academic Director of DeliverEd, and a Fellow at CEPR. She holds a PhD from the University of Bristol.

‘How do we better understand what motivates people in the public sector?’

At the 2017 Challenges of Government Conference by the Blavatnik School of Government, Clare chaired a discussion on how to respond effectively to the breakdown in government trust in recent years. The discussion featured four expert panellists, including Martin Williams from the Evidence in Public Policy online short course. Watch below.

Clare delivers the learning for our online short course focused on the relationship between economics and public policy. If you wish to enhance your understanding of this relationship, find out more about the Economics for Public Policy course.

Our academics are at the forefront of their research fields in government and public policy, and we want to give you the opportunity to benefit from this expertise when you wish to develop. Plus, our short courses are flexible and online, meaning you can study around your existing commitments and develop real-world skills without a pause in your career.

Start online learning with our expert faculty and see where their knowledge can take you.

Learn more about the online government and public policy courses our expert academics facilitate on our courses page.